Traditional preschools aren’t philosophy-driven and don’t have an enhanced learning approach. The progress of all kids is linear, and they don’t thrive in such a teaching style. In contrast, Montessori preschools practice philosophy to foster self-motivated growth for kids in different areas.

Montessori and traditional preschool is a legit comparison if your toddler is big enough to get some education. Frankly, I like Montessori or other philosophy-based (Waldorf, Reggio Emilia, High Scope, or Parent Co-ops) preschools over traditional ones.

The typical schedule, boring games (which my kid may not even try), and a robot-like teacher (who’s doing the same thing every time and teaching lessons almost forcefully) of traditional preschools cringe me. No way my kid could be thriving on ordinary!

In contrast, Montessori teaching focuses on activity-based learning to engage a kid’s all senses. Loved their curriculum areas: practical life, cultural, sensorial, math, and language. But for traditional preschools, you’ll get that old-age approach with ever so slight modification!

Well, I have more fun facts to share about this comparison. Bear with me! 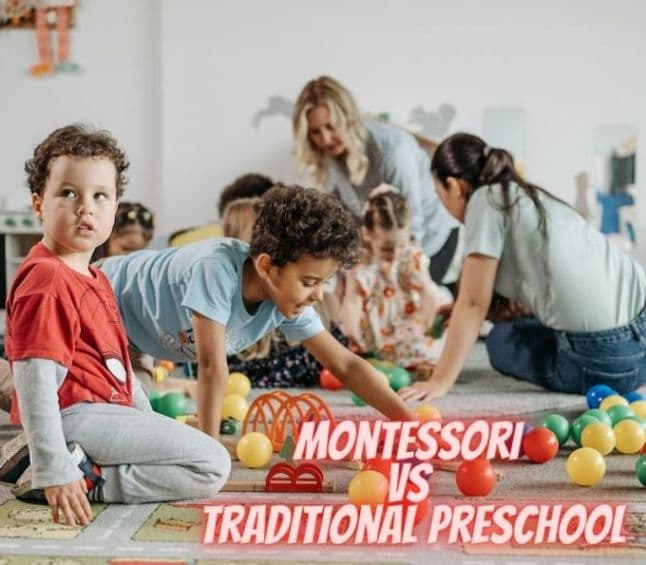 I may sound inclined toward Montessori preschool because I have a shy kid who hangs back and needs someone to foster her self-motivated growth.

But if your kid is a little hyperactive and loves playing all day rather than working, traditional schools might be a better choice. These youngsters can’t be left at their own pace and should be treated according to their nature. Otherwise, they won’t be learning anything at the end of the day.

Although I might sound so, I am not prejudiced against traditional preschools at all. I know they have many good sides as to why numerous parents still consider them over other philosophy-based schools.

However, Montessori preschools have their own set of advantages. But that doesn’t mean they’re free of drawbacks. To know more about which one excels where in this comparison, check out the detailed discussion below.

As I’ve already said, the basic difference between both these schools is how they approach teaching.

Maria Montessori, a doctor from Italy is known to establish Montessori schools in the early 1900s. She proposed a unique approach to education based on her years of observation of how children’s minds work differently based on their various backgrounds.

So she emphasized child-directed, individualized training over the traditional way. And her teaching method was widely adopted across counties and continents. 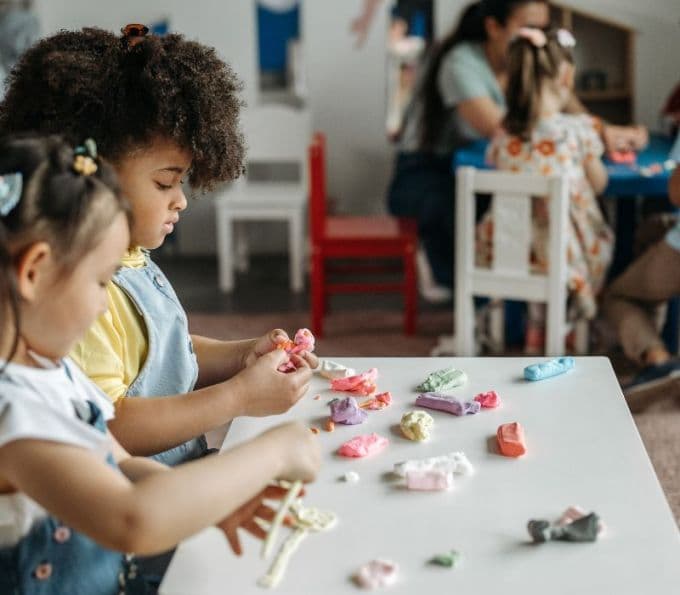 One reason is it allows a child to choose the activities they like and work on them for as long as they want. The teacher is only an observer and tracker of their progress while facilitating the use of materials. Kids were seen to become self-regulated, self-disciplined, and more confident in this method.

On the other hand, traditional preschools are basically play-based centers that have been there for more than a century. They believe children learn best through playing. Although the playtime is open-ended, they’re mostly unstructured.

It’s a teacher-directed teaching style where a teacher gives lessons based on different play-based activities. Since the play and games focus on problem-solving, conflict resolution, and cooperation, many children can adopt these important life skills from the very beginning of their life.

The second key difference between Montessori and traditional preschools is their environment. Although both these preschools provide supportive, children-friendly environments, their overall environmental structure differs a lot.

The York University’s Professor Emerita Carol Anne Wien, who was also a former Montessori teacher, notes the environmental structure difference in both these preschools. 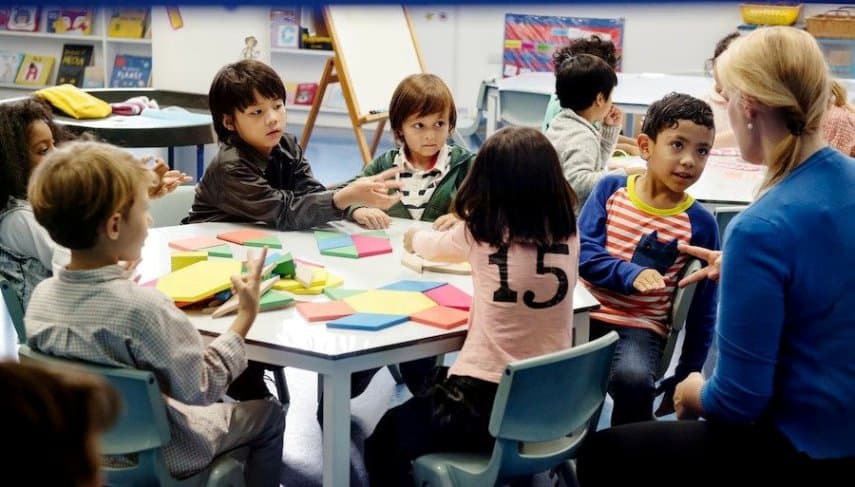 On the other hand, traditional preschools are the reverse; they’re highly structured in time but not in space. Since they follow a daily routine, knowing what time it is can tell you what is the kid doing at that period. The teacher needs to finish the lessons while allowing children to play in that timeframe.

Besides, Montessori environments are quieter and less distressing than their traditional counterparts since individualized training limits children’s chaos. In contrast, traditional preschools have a more vivid, highly stimulating, and louder environment.

So going for a tranquil environment is the best option. Even if you’re choosing a traditional preschool, make sure the environment isn’t harshly colored, like it shouldn’t be filled with yellow, red, or heavy doses of cartoons and prints. Although they look fun, they could visually and subconsciously harass the children.

Also, look at the number of students allowed per class. You must ensure the classroom isn’t so noisy that your child becomes a furious being after returning home. For these reasons, Montessori makes a better choice in terms of the environment.

Montessori preschools are generally organized into 5 curriculum areas, such as practical life, cultural, sensorial, math, and language. Each study area comprises a set of Montessori materials to cover the key skill and knowledge of the respective learning area.

In contrast, although traditional play-based preschools arrange their curriculum into different areas or stations, they’re not well specified and are mostly based on random themes or activities. While students can learn different aspects, they don’t have a clear set of goals to achieve.

So here, Montessori preschools get an edge over traditional ones because of having a specific set of goals that children need to achieve.

Read: Types of Preschool Curriculum for Toddlers and Kids

Another key difference between both these preschools is the role of student and teacher in learning. While Montessori preschools are more student-directed, traditional preschools emphasize teacher-directed learning.

So in Montessori, students can choose activities based on their own interests, and they can perform them for as long as they want. A teacher may guide them to accommodate the experience but will hardly help them. So children get an individualized training style and aren’t forced to do what they don’t like.

But traditional preschools have a teacher to lead the class, who’ll assign the activities for the students. Typically children take part in group activities even if they don’t find interest in that. Although it allows them to develop social and cognitive skills, they remain far from self-motivated growth.

The difference in the kind of activities they perform is also a major difference between these preschools.

On the other hand, the activities in traditional preschools are designed with various games that can teach life skills secretly. Some of these include duck, goose (helps decision making), Simon says (helps following instructions), and hide & seek (helps assess the problem and find a solution).

There are many more such activities like parachute games, red light/green light, hopscotch, musical chairs, etc.

Read: Why circle time is essential for preschoolers?

Now, I would want you to look into the pros and cons of both these preschools.

Check out what are some pros and cons of the Montessori teaching method below.

Here I’ve listed some pros and cons of the traditional preschools. Check them out.

Which is Better: Montessori Vs Traditional Preschool

I’m inclined to Montessori preschools for many reasons. The major one is the way it prepares the child for the next stage of education. I believe learning to be independent and confident through Montessori education set up a strong foundation for my kid’s overall journey she’s going to have ahead.

I love their specific creative activities, curriculum areas backed by goals, quieter classrooms, and moreover the approach to self-motivated learning where my kid can choose whatever she wants to learn and she won’t be forced.

At the same time, I figured out a few drawbacks of this teaching style. Like I feel too much independence can make it challenging to guide her as she may start doing things in her own way. She may become intolerant of advice. But again, they can be reversed with good parenting.

For traditional preschools, there could be many reasons to choose that as well. Firstly, some may not afford Montessori preschool as they’re expensive. And traditional preschools can also be public with fewer fees to pay. For idea about preschool expense you will check this article: Why is Preschool So Expensive? Is It Worth the Investment?

Also, if the child is a little too active, their independence may be limited and they should be guided by a consistent routine and structure of traditional preschools.

But the fact that these schools are just some sports centers that don’t really focus on individualized training puts me back. The classrooms are also noisier and more stressful. The teachers rarely focus on a specific student, something very different from their Montessori counterparts. Probably, these are the reason why I prefer Montessori over traditional ones.

I feel Montessori preschools are better as they’re more well-designed for toddlers. They’re expensive, but if you can afford them, you should go for them. Your child will have quality time there and might even surprise you with newly learned skills.

You can see the difference in your child’s behavior who’s learning in Montessori. They’ll probably be more confident and more ordered now. But again, it’s not for all. Some children require traditional structure and routine to keep them ordered and disciplined.

So for them, traditional preschools make a better choice. They’ll still learn many things in these schools through fun activities that will prepare them well for their kindergarten stage. So I have my winner between the Montessori vs traditional preschool, now it’s up to you to choose yours!`